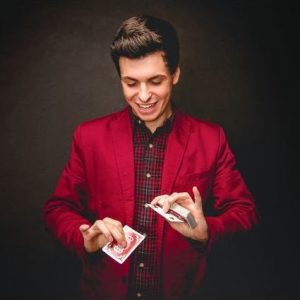 Jason has been called “The Magician For The Millennial”. Born in the West Coast of Canada, Jason spent his childhood years mastering the art of sleight-of-hand and now at just 20 years-old, he has spent the past decade performing his magic all across North America.

He has won numerous international awards for his craft, including a gold medal at PCAM and a bronze medal in The International Youth Magic Championships in Las Vegas. Recently, Jason Verners was nominated for the Canadian Rising Star award by Magicana.

Verners’ illusions have been featured on television channels including: The Space Channel, CBC and CTV. Jason’s work behind the scenes as a Creative Consultant has landed him credits in YTV’s Tricked, Shane Black’s The Predator (2018) and countless magic television specials with Sansminds and Vortex Magic. Verners’ list of clients include: The Juno Awards- Entertainment One (eOne), 20th Century Fox, Atomique Productions, Westwood Recordings and Wideglide Entertainment. Jason Verners can now be found performing at celebrity events, theaters and festivals all over the world- and whether it is a family-friendly stage show, or corporate close-up magic, Jason is excited to bring magic to your event!

You can find out more about Jason and book him for your event on his website.

Not only will you find Jason Verners performing his signature close-up magic throughout the conference, but he will also be hosting a roundtable discussion!

Jason will discuss the challenges he faced with starting an entertainment business at just thirteen years old. He will also discuss his goal-setting techniques and remind you to #DoWhatYouCan’t.

Takeaways from Jason’s roundtable discussion include:

1: How I turn my failures into the biggest successes.
2: A clever magical way to exchange contact information.
3: How David Copperfield can fly. Or maybe not…