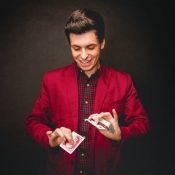 Jason Verners has been called “The Magician For The Millennial”.

Born in the West Coast of Canada, Jason spent his childhood years mastering the art of sleight-of-hand and now at just 20 years-old, he has spent the past decade performing his magic all across North America. He has won numerous international awards for his craft, including a gold medal at PCAM and a bronze medal in The International Youth Magic Championships in Las Vegas. Recently, Jason Verners was nominated for the Canadian Rising Star award by Magicana.

Verners’ illusions have been featured on television channels including: The Space Channel, CBC and CTV. Jason’s work behind the scenes as a Creative Consultant has landed him credits in YTV’s Tricked, Shane Black’s The Predator (2018) and countless magic television specials with Sansminds and Vortex Magic.

Catch Jason performing his signature close-up magic at the Networking Reception from 4:30 – 5:30. It will blow your mind!

He will also be floating around the trade show at SOHO Summit making things disappear.