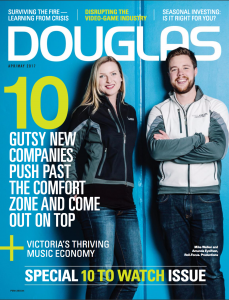 The cover line of the Apr/May issue says it all: “10 Gutsy New Companies Push Past The Comfort Zone and Come Out on Top.”

“SOHO Summit is all about helping small and home office business owners succeed by giving them the tools to push past their comfort zone and empowering them to efficiently manage and grow their business,” says Chris Burdge, Founder of SOHO Victoria

“These 10 winners are an inspiring group,” says Lise Gyorkos, whose company Page One Publishing produces Douglas. “Not only do they demonstrate innovation and a dedication to their businesses, they embody the entrepreneurial spirit that the 10 to Watch Awards were created to champion.”

The winners, announced at a ceremony on April 4th at DeVinci Centre in Victoria, were selected by an independent panel of judges that included business owners and representatives of the University of Victoria Peter Gustavson School of Business and Royal Roads University School of Business. 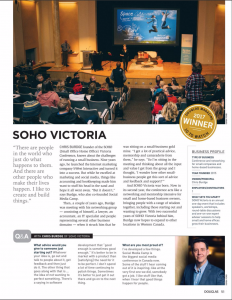 Douglas noted SOHO Victoria “acts like a networking and mentorship intensive for small and home-based business owners, bringing people with a range of wisdom together, including those starting out and wanting to grow”.

The Douglas article features a look inside SOHO’s value proposition, “the most productive day you’ll have all year”, which is delivered on with a combination of workshops, round-table discussions, 1-1 coaching and world-renown speakers like TEDx Speaker and TV show host Isabelle Mercier-Turcotte; Royal Roads University Adjunct Professor Alex Glassey; and TEDx Speaker and best-selling author Marc Stoiber, as well as fellow 10 to Watch winners Angela Cote, Mike Walker and Amanda Eyolfson.

Highlighting “the very best of Vancouver Island’s new businesses,” Douglas says that in selecting its 10 To Watch winners its panel wanted “more than the requisite passion. They wanted business who demonstrate sounds business models, scalability, talent and market potential.”